Skip to content
I got a chance to attend the preview of the Takashi Murakami: The Octopus Eats Its Own Leg exhibit at the Chicago Museum of Contemporary Art. All I had known about him was that he collaborated with Kanye West and Louis Vuitton to create high-concept branding. It turns out that these branding projects were only a relatively brief phase in his career, albeit one in which his talents coalesced in perhaps their most perfect form. I was prepared to see him as a sort of Japanese version of Jeff Koons, but to my eye, Murakami's "And Then, And Then And Then And Then And Then (Red)," (1996–97, below), created during the peak of his branding phase, is his most perfectly realized work of art. 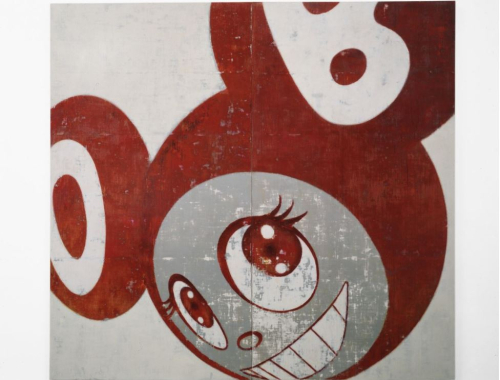 Murakami started his career painting gloomy meditations on ecological disaster. He was headed to a career as a minor artist, a Japanese version of Anselm Kiefer but without the grandeur. Then, in the story told in the MCA exhibit, one day Murakami decided he wanted to be an anime artist, so he created a character called Mr. Dob. To clear a space for the character Murakami swept away his landscapes of doom and painted a pure blue field onto which Mr. Dob appears in a off center, a tiny fraction of the frame, smiling timidly. There's a whole gallery in the MCA exhibit devoted to these transitional paintings. They're completely unlike anything that came before them. Compare an early painting at left with one of Mr. Dob's first appearances on the right.

A lot of retrospectives in art museums try to document transitional moments in artists' careers. I don't recall ever seeing such direct evidence of a painter morphing into an entirely different artist. I'm not exaggerating when I say it's exciting to watch.
Once he discovered anime and Louis Vuitton, his paintings and sculptures became eye-catching without necessarily being accessible. We see Mr. Dob evolve from a tiny, fragile figure in a vast background into a landscape himself, a framework onto which Murakami maps out the imagery he had developed during his mid-career branding phase. In "Tan Tan Bo Puking–a.k.a. Gero Tan" (2002) branding reaches its logical end as grotesque myth-making. Nevertheless, the painting has a kind of beauty. Murakami's best work creates a tension between the beauty of its colors and the ugliness of its images. 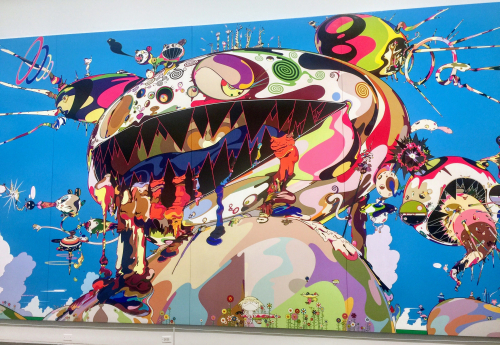 That tension, however, dissipates in Murakami's twenty-first century work. His canvases have grown ever larger, some taking up an entire gallery wall. I found it hard to see these larger canvases as a sign of artistic growth. It's almost as if Murakami is looking for something new to paint and if he expands his canvases he may find it someplace. While there's a lot to look at in these late Murakami canvases, like smiling daisies sprouting from the bottom of the frame, the wall-eyed monsters command one's attention the most. We're told these figures represent spiritual enlightenment, but how? Without access to the texts Murakami is working with, it's hard to tell, and the MCA provides only cursory information. The viewer is left to contemplate a disconcerting aesthetic–part Hieronymus Bosch, part Hello Kitty, part mad doodler. 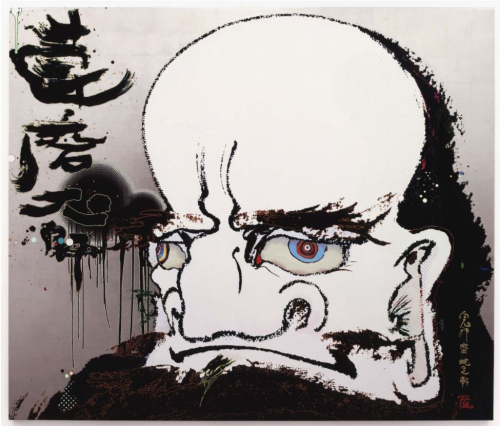 Even the title of the exhibition, The Octopus Eats Its Own Leg, suggests there's an artistic crisis just around the corner, if Murakami hasn't already fallen into one. The most recent work in the exhibit, some of it created especially for it, seems unfocused, although that's most likely because the earlier work was more selectively curated. But even the images in this gallery demand your attention. Some retrospectives allow you to gloss over some artworks to get to the next development. Not Takashi Murakami–every image is arresting. 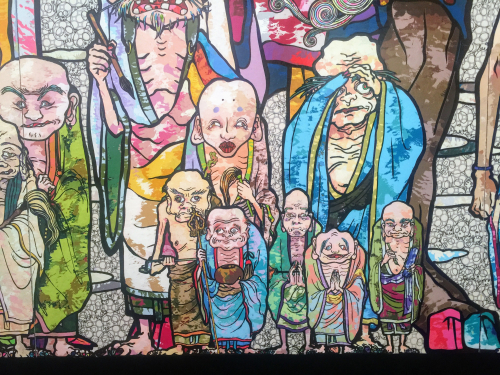 One can disapprove of Murakami's dalliance with corporate branding. The cover he designed for Kanye West's Graduation album is cool, but West is an ambiguous figure in popular culture. Lots of contemporary artists mix high and low cultures, East and West–in this sense Murakami isn't that special. Some of his daisy paintings look like they belong more on an iPhone case than a museum wall. Yet one comes away seeing Murakami's art as more than the sum of its parts. You should go to the MCA retrospective to see an artist evolve at a time when art has become a big business and not just simply the tool of it.