The generic city is a city without names. The great city, on the other hand, is a collections of names. London is not just “London.” It is also Big Ben and Trafalgar Square and the Shard.

Many of Chicago’s names are buildings named for corporations: The Sears Tower, the Wrigley Building, the Tribune Tower, the John Hancock Center. Many of these names are being replaced or they are being removed from their original position in the production of meaning. In the middle of the 2008-09 real estate crisis the Sears Tower became the Willis Tower. Soon the Tribune Tower will no longer contain the Chicago Tribune newsroom. Even though no newspapers will be produced there, the building will still be called the Tribune Tower because brand names have become commodities in their own right.

Now the John Hancock Center will lose its name. The John Hancock company, no longer an independent entity, has asked that its name be removed from the tower, years after vacating it. The tower’s identity will revert to its position on the grid and assume the name 875 North Michigan Avenue. You will look at the building but you are prohibited from saying its original name. This may seem odd considering how much effort corporations give to insert their brands into our speech. Yet the prohibition against its proper name is really another example of how corporations try to own language. 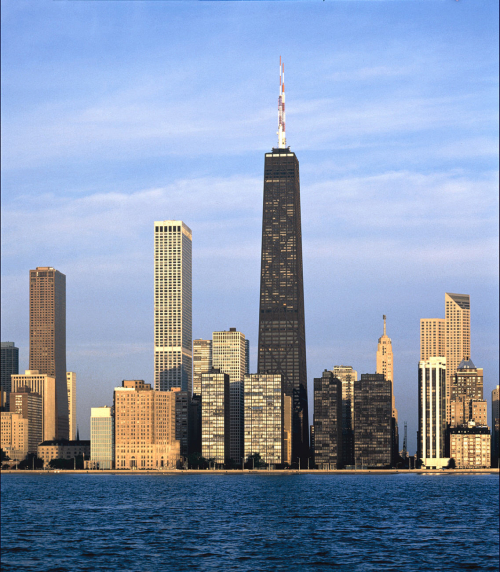 The tower’s anonymity may be temporary. The Hearn Company, which owns the office and parking parts of the building—the visual unity of the building as a single property is an illusion—is actively seeking an “important identity” for the tower, as if it were a newly divorced woman. The new identity may come from a local corporation. More likely, it will come from nowhere, like the Willis company.

After the tower receives its new name, no doubt many people will continue to use the old John Hancock name, partly out of habit, partly from reluctance to give up a piece of Chicago history, and partly from resistance to becoming a shill for a brand.