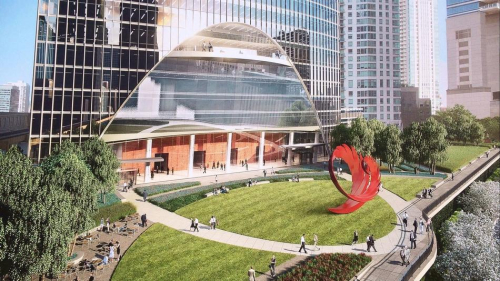 "Architect of defunct-Chicago Spire to design riverfront sculpture" reads the headline to Blair Kamin's story about the announcement of a Santiago Calatrava sculpture to be placed between the Chicago River and a new skyscraper. The headline places the story in exactly the right context. In the days before the Great Recession Calatrava designed a 2,000-foot-tall tower to be constructed along Chicago's lake shore.  The building, known as the Chicago Spire, was more big than beautiful, but it was undeniably ambitious even though no one had a plausible plan for constructing it.

The red sculpture is a retreat from the Spire in every way possible. The artwork is set in a void on the river instead of commanding the lake front. As an aesthetic object, it's not much. It's all flourish and no presence, like a necklace from Kay Jewelers. Calatrava has given up his pristine white in favor of a red that makes no sense in the context, unless the intent is to make sure the architectural boat tours don't overlook it. Perhaps the sculpture doesn't need to be beautiful, only noticeable.  Calatrava likes similes, and one may be at work here: It's as if the Spire had actually been built, then someone set fire to it and a single red ember floated up the river and came to rest.

So far Calatrava can't even bring himself to name the sculpture. In the meantime, the owner of the Spire site is preparing to unveil the design for another building to be erected over the round hole over which the Calatrava's tower was supposed to rise.