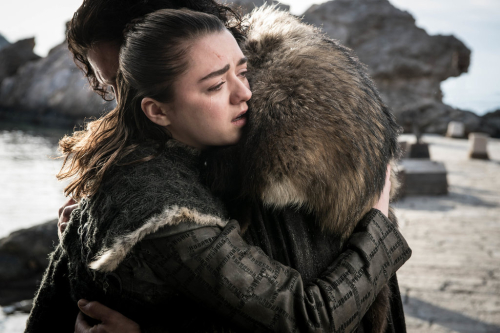 So I watched the series finale of Game of Thrones on Sunday night. Watching the finale it occurred to me that GoT, like all limited series, ends both too early and too late. Game of Thrones didn't end when it should have because of the differences in its source material and the imperatives of television production.
Adapted from George R.R. Martin's novels, GoT started as the history of an entire world and ended with a reformed libertine dwarf sobbing in front of his brother, "You were the only one who treated me well." At some earlier point in the body count GoT reached the limits of its known world and became a melodrama of interpersonal relationships–with dragons. Perhaps not coincidentally, somewhere around season five GoT switched from a literary adaptation to an original TV production–in other words, from novelistic worldmaking to costume and set design for celebrity actors.
This isn't to say that the novel is a superior medium to television. I want to suggest merely that GoT extended its story beyond what Martin's initial premise could support. The series finale made choices that made sense given developments from the last few seasons but were unsatisfying dramatically. Tyrion is arrested yet again, but he doesn't suffer his long-overdue execution. Experience has softened his self-interest, so he's thrust, almost literally, into a position in which he speaks for the showrunners, David Benioff and D.B. Weiss. Tyrion argues for Bran's ascent to the throne, even though Bran is a flimsy vehicle for such power and narrative weight. In effect, Tyrion posits that storytellers are ultimately more important than the people, which is consistent with Martin's original vision of the series but inconsistent with the ways in which the showrunners have developed the female characters, especially the Stark sisters. His creepiness and lack of charisma aside, Bran is a disappointing king because he isn't a storyteller. Rather, he's a repository of narrative details which he dispenses whenever the narrative wheels threaten to grind to a halt. A novelist would have handled these problems through a third-person narrator. A television series needs a character to provide the same information. Bran is sort of the hand of the showrunners. Ever the narrative functionary, at the conclusion Bran was there to brush aside unresolved conflicts.
Storytelling is important, and so is television production. The narrative sped up to television pace up once the series moved beyond Martin's novels. At some point in season five GoT transitioned fully to television production and, consequently, to spectacle in place of text. In the finale we saw lengthy scenes of Jon and Arya being whisked offstage with barely a word. There's no more meaning to be gleaned from these scenes. The characters have nothing left to say.
The hastiness of the last season and the last episode in particular goes against the essential pleasures of long narratives and continually partial knowledge they offer. In the endgame of GoT Cersei was clearly only a placeholder, her power arising not from change but from delay. Pretty much all she does in season eight is stare our from a balcony, waiting, like us, for a just ruler to appear to bring the story to an end. Daenerys' mad strafing of King's Landing in the penultimate episode moved the series toward this ending, but she never really explains herself, having been consumed by her passions so her lover can be freed from his. She survives only long enough to bellow out her tyrannical plans before meeting her inevitable end.
Westros is spared another bloodthirsty (and colorful) tyrant. Instead,  GoT resolved itself into fantasy rather than tragedy, in spectacle rather than mimesis. Sure, there could be a sequel that follows Arya to whatever is west of Westros (or Restros, as someone joked on Twitter), but updating the adventure narrative with its exoticism may prove too great a challenge for HBO's showrunners. It would also be expensive to shoot.
Now that it's over, what to watch next? How about impeachment hearings?