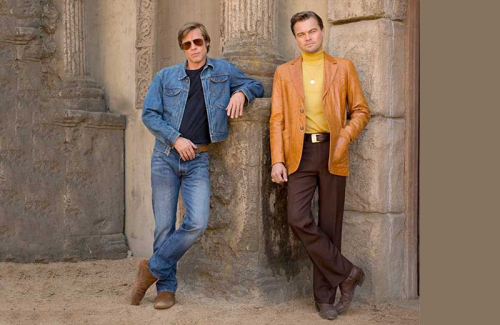 Once Upon a Time . . . in Hollywood is said to be Quentin Tarantino’s second to last film, so presumably he’s given a lot of thought to what kind of movie he wants to make. At a time when Hollywood is still under a cloud of a thousand censorious hashtags, Tarantino has decided to create a kind of Playboy Hollywood—fun perhaps for someone like me, but is this right time for that sort of thing? And as long as we’re raising doubts, there’s Tarantino’s mode of spectatorship—picking through video store discards for B movies to worship. Isn’t it out of date at a time when algorithms can pick through the refuse of film history? Tastes in movies have evolved since Reservoir Dogs (1992)Has Tarantino evolved with them? With its publicity stills of Leonardo DiCapro and Brad Pitt sporting cool 1969 clothes and Harvey Keitel expressions, Tarantino seems to be asking for trouble with this movie.

Once Upon a Time takes place in the last days of the TV Western. There were a lot of Westerns on TV in the 1960s, and they were all pretty much like Gunsmoke. These productions employed a lot of actors, who were pretty much interchangeable. A few actors would distinguish themselves to become movie stars—Clint Eastwood, Steve McQueen and some others—but Rick Dalton (DiCaprio) is never going to be one of them. He’s learned this by the time the movie starts. It’s the great revelation of his life. All that’s left is the struggle to keep his house in the Hollywood Hills so he can channel surf through the rest of his days. When things look especially bleak he takes a stab at being an Actor. He’s invited to audition for a role in a pilot for yet another TV Western and he puts everything he has into it, which for Rick means rehearing his lines while floating in his pool the night before the audition. The next day at the studio he‘s unnerved by a child actor steeled by her own precociousness. All Rick has going for him is a dim understanding of what desperation will make a man do. Tarantino likes to give veteran actors room to do what they do best; it’s one of his most winning qualities. He trains his camera on DiCaprio driving his character into a paroxysm of self-loathing after screwing up the first take. Rick vows to do better, but in a way a C-minus student might do because he think it’ll get the teacher off his back.

Then, in the second take, Rick nails it. In a slow-burn scene of long tracking shots and moody lighting Rick draws on everything he’s learned about failure, dashes the girl actor to the floor (you can hear the gasps from the #MeToo crowd), and forcefully delivers an ultimatum to the respectable townspeople he’s managed to keep at bay. The ultimatum itself is completely forgettable—something about a demand for money or land or maybe just a drink. What’s memorable is the way Tarantino shoots the scene. It’s supposed to be a TV pilot, but Tarantino shoots it like the auteur he’s always considered himself to be. With its dramatic tracking shots, diegetic lighting, and deep-focus shooting, you don’t see this type of mise-en-scene in television now, let alone in late 1960s television Westerns. You’d swear the dust hanging in the air is the dust they used while shooting High Noon. The scene is a self-referential form of drama, but it’s drama nevertheless.

And that about does it for Rick. Nothing comes of the pilot, so Rick goes off to make Spaghetti Westerns and other trifles for Sergio Corbucci (a real person). For his labors Rick is paid in lira, which isn’t real money, so he returns to Hollywood with nothing but an overdressed Italian wife and the same problems he had before he left.

While Rick is busy in Italy, our full attention now turns to Rick’s stunt double, Cliff Booth, who lives in a battered metallic world lit only by the glow of a movie screen. Cliff glides untroubled through the indignities of driving a battered car and inhabiting a ramshackle trailer. A few B-movie villains materialize and he dispatches them in a bored and distracted way, as if he were in a video game. He’s only adding to his score and not yet saving anyone. Should Marvel Comics ever create a superhero called Whateverman, this would be his origin story.

Without Rick to drive around, Cliff doesn’t have enough to do, so Tarantino pulls the Manson Family off the shelf. Cliff tools around LA in Rick’s Cadillac, bought from the same used car lot all Tarantino characters get their cars. Cliff picks up a teenaged sexpot from the Family. In his younger days Tarantino would have gone for it, making something funny and dangerous out of the encounter. Instead, Cliff brushes the girl aside, declaring he doesn’t get involved with “poontang” (derisive laughter from the #MeToo crowd). From there Tarantino takes the old fud’s route of staging a Western-style showdown at the Spahn Ranch, where the Manson Family lives. Tarantino juggles several scenes of action, among them shots of the Family members lounging around like snakes and Bruce Dern looking like he has no idea what he’s doing in this movie. Even though the dramatic raw materials for the Spahn Ranch scene are richer than the audition scene, Tarantino lacks the classical Hollywood directors’ feel for cross-cutting, so it doesn’t come off as well as the audition scene, which relies heavily on mise-en-scene.

At the end, though, Cliff saves the beautiful Sharon Tate from the savagery to which history subjected her. Tarantino furnishes Cliff with a dose of LSD for the ordeal, but the joke peters out midway through the mayhem. A hero stoned through the climactic action is a Tarantino touch, just as John Ford would burden his gunslinger with a tragic past. You know you’re in a Tarantino movie when you’re cackling with glee at a moment when you should feel pathos.

The credit for saving Sharon Tate’s life accrues to Rick, who is finally recognized as the Rick Dalton, movie star, as if he’s been a blurry presence the past few years and he’s finally come into focus. The last shot of the film shows Rick walking up a hill to party with Sharon and her friends. This is all Rick wants out of life, so happy ending, right?

Yes . . . but. Tarantino can be sour when he means to be profound, and this is one of those moments. The pleasure of Hollywood movies, he says, comes at the cost of rewriting history. (Never mind Tarantino himself has rewritten history in his own films when it pleases him.) Classical Hollywood concerned itself with little else besides wish fulfillment. It’s the kind of point a jerk would make.

Some people have had it with Tarantino. Richard Brody has called Once Upon a Time “obsessively regressive.” A number of people have complained that Sharon Tate is the only meaningful female presence in the movie. Others have shrugged and enjoyed watching DiCaprio and Pitt hang out on screen. All in all, a typical range of reactions to a Tarantino film. Word on the street is that Once Upon a Time is an early favorite for Best Picture Oscar, indicating Hollywood isn’t too concerned about the film’s snarky ending and featherweight female characters. Personally, I thought Once Upon a Time was the first time since Jackie Brown that Tarantino was more interesting than his sources. He’s constructed a male space out of inadequacy rather than fear, his usual practice. This shows growth, I suppose. Still, for his next, last film, I hope he demonstrates he’s continued his film education past the movies he saw by the time he was 19.